According to different wiring methods, GFCI can be divided into:

The protector uses a socket to output and connects with the plug of the load equipment.

The protector shell is glued to the plug as a whole, and the shell and the output socket are connected by cables or wires. 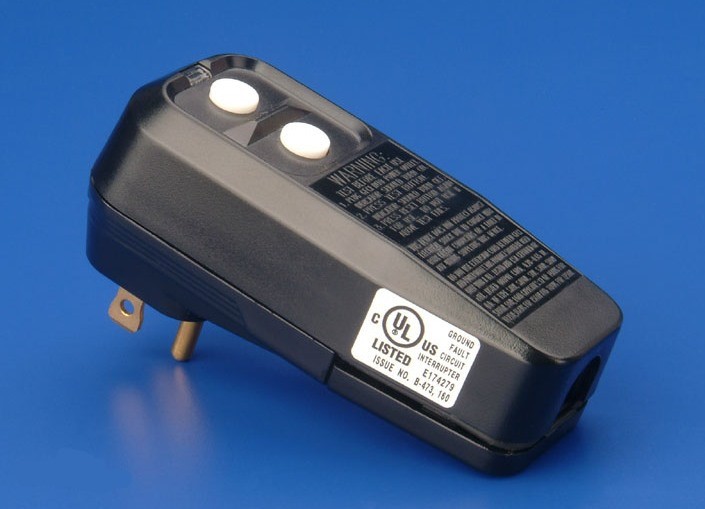 Because GFCI detects ground faults, it can also prevent some electrical fires. In a household wiring system, on a power outlet, under normal circumstances, the current of the hot wire and the neutral wire should be equal. GFCI monitors the current difference. If the difference is greater than 6 mA (according to the UL943 standard, when the leakage current is 6mA, the disconnection time is 25 milliseconds), it can cut off the power at 0.025s (disconnection time when the leakage current is 4-6mA in the case of 500-ohm impedance according to the UL943 standard) to ensure personal safety. The GFCI interrupts power faster than a blink of an eye to preventing lethal power. You may receive a painful shock, but you will not be electrocuted or receive severe shock injuries.

All GFCIs should be tested every time when they are used to ensure that they can work properly and to protect you from fatal shocks. GFCI should be inspected after installation to ensure they can work and properly protect the circuit. To test the GFCI socket, first, plug the nightlight or lamp into the power socket, then the light should be on at that time. When pressing the "TEST" button, the "RESET" button of the GFCI should pop up and the light will go out. If you press the "reset" button, it pops up, but the nightlight is not off. In this situation, the GFCI has been improperly wired. Contact an electrician to correct the wiring error. If you press the "reset" button, it does not pop up, which shows that the GFCI is defective and should be replaced.

GFCI uses the circuit to detect the opening or closing of the circuit, and the Reset Button (or indicator light) displays the current state of the circuit so that the user can know whether the circuit is currently in a normal working state or a faulty state. In order to improve the safety of use, an auxiliary switch is set to control the power supply of the circuit board to prevent the circuit board from being damaged due to current overload. It is designed to have the function of automatically disconnecting the circuit to avoid electric shock caused by foreign matter in the load, that is when the live wire of the working circuit is grounded through the foreign matter. This kind of function is for some customers who are at risk of electric shock, when a strong current flows through their bodies, the power supply will be automatically removed.

GFCI checks the balance of the current flowing through the live wire and the neutral wire. If the neutral wire current suddenly becomes much smaller than the live wire current, an electric shock may have occurred. A part of the current flows back to the ground wire through a loop outside the neutral wire. If the current of this part is between 4.2mA and 5.8mA, or greater, GFCI will send out a pulse that cuts the power of the load circuit through a mechanical structure. GFCI limits the time that the electric shock current flows through the body of the shocked person instead of the size of the current. This time is calculated based on physiological data to avoid damage to the health of ordinary people. GFCI has a simple appearance and inherits the original functions of GFCI products. The operation of Bridge Contacts strengthens the ability to solve faults caused by the reverse connection of the power input line and the load output line, and prevents the loss caused by the initial wiring errors of the installer, thus further improving the function of the leakage protector.

What to do if the GFCI trips:

American Leviton (LEVITON), founded in 1906, headquartered in New York, is a global leader in the manufacture of electrical accessories, lighting control, energy management, and structured wiring products. Leviton has 35 factories worldwide, mainly in the United States, Canada, Mexico, and China. All factories have passed ISO9001/2001 certification and have highly automated production lines; provide a complete set of high-quality products and services, including design, modeling, production, and logistics.

American TOWER is affiliated with the American TMC (Tower Manufacturing Corporation). TMC, founded in 1957 and headquartered in Rhode Island, is a professional manufacturer of switch products. The products involve GFCI, ALCI, LCDI, and other professional leakage protection products. All are applicable in different industries and products and have obtained UL certification. It has wholly-owned subsidiary factories in the United States and Shenzhen, China, as well as a branch in Hong Kong. The company has a complete R&D, design, production, sales, and after-sales service team.

ELEGRP is the only private company to obtain UL certification in the field of portable leakage protectors. It was established in Shanghai in 2000 and has four branches. At the end of 2010, it relocated to Suzhou Industrial Park. Its main markets distribute in the United States and Canada. It has more than ten years of experience in the North American leakage protector market. The products involve professional leakage protector products such as GFCI, LCDI, PRCD, etc. Relying on its own strong R&D capabilities, it has solved technical difficulties and avoided the United States patents, independently designed and developed products, and obtained several Chinese patents and US patents. The company also produces other series products of wiring devices, such as switches, plugs, sockets, etc., all of which have obtained UL and CUL certification.

DEFOND and NANDAO are mainly Hong Kong and domestic companies. Among them, DEFOND has also begun to involve other industries, including automotive electronic parts.

What is a Printed Circuit Board?
RF Modulator: Working Principle and Development Trend