1)Vertical sealed fixed inductor: The vertical sealed fixed inductor adopts the same-directional pin. The inductance range of domestic ones is 0.1~2200μH (directly marked on the shell), the rated working current is 0.05~1.6A, and the error range is ±5%~±10%.  The imported ones have a larger current range and a smaller error range. TDK series color code inductors are imported, and their inductance is marked on the surface of the inductor with color dots.

The LGA series adopts an ultra-small structure, and the appearance is similar to 1/2W color ring resistors. Its inductance range is 0.22~100μH (marked on the shell by the color ring) and the rated current is 0.09~0.4A.

I Constitution and main functions

A fixed inductor is actually a fixed coil, which can be a single-layer coil, a multi-layer coil, a honeycomb coil, and a coil with a magnetic core. In order to reduce the size of a fixed inductor, a wire of the corresponding diameter is usually selected to wind on the magnetic core according to the inductance and the maximum DC operating current, and then it is put into a plastic case and encapsulated with epoxy resin.

The main function of the fixed inductor is to form a resonant circuit with other electronic parts in the electronic circuit. Utilizing the inductance characteristic of "passing direct current and resisting alternating current" of inductors, it is widely used in electronic circuits. In electronic circuits, the inductance coil acts on the AC current limitation. It can form a high-pass or low-pass filter, phase-shifting circuit, and resonant circuit with resistors or capacitors. The transformer can perform AC coupling, voltage transformation, current conversion, and impedance transformation. Knowing from the inductive reactance XL=2πfL, the larger the inductance L and the higher the frequency f, the greater inductive reactance. The magnitude of the voltage across the inductor is proportional to the inductance L. The inductance coil is an energy storage element. It stores electric energy in the form of magnetism. The amount of stored electric energy can be expressed by the following formula: WL=1/2 Li2.

The main functions are as follows:

Filtering: Filtering out specific band frequencies in the signal to suppress and prevent interference. This operation can make sure that signal waveforms are smooth and regular and reduce signal noise.

Notch: Notch is the periodic voltage disturbance generated when the AC input current is switched from one phase to another phase (commutation) under normal working conditions of power electronic devices. In the electronic circuit, the inductor has a limiting effect on the AC current. It can form a high-pass or low-pass filter with a resistor or capacitor to reduce the impact of periodic voltage disturbances. 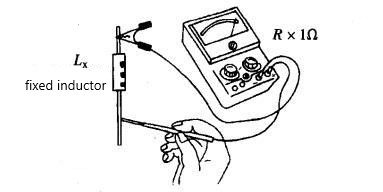 III Detection of inductance and replacement of inductor

The replacement of inductors should generally meet the requirements of the inductance value, especially for the inductors used in the tuning loop. The inductance value should correspond as accurately as possible and the wire diameter should also be basically the same, otherwise, it will affect the tuning loop parameters and cause the whole machine parameters to be re-adjusted.

In terms of mobile communications, the rapid technological revolution has led to the emergence of personal networks in the world, thus, equipment is reduced in size,  frequency increases, and progress is made in digitization. As a result, the demand for fixed inductors has expanded to the low inductance range, requiring reduction of inductance value error range and reduction of component size.

In Europe, the United States, and Japan, technological innovations are rapidly emerging. Mobile communication devices, such as portable phones, car phones, and cordless phones, have become smaller while gaining the characteristics of high-frequency operation capability and low power consumption. Major functional improvements are expected in the future, including innovations in communication systems.

2. Cross-sectional area: the thicker the enameled wire, the greater the inductance.

3. Whether it has a core or not

1. The iron core and winding of inductors are prone to change in inductance due to the effect of temperature rise, so it should be noted that the temperature must be within the use range.

2. The winding of the inductance easily forms an electromagnetic field after the current passes. When placing the components, pay attention to keeping the adjacent inductors away from each other, or the windings are at right angles to each other to reduce the amount of mutual induction.

3. Between the windings of each layer of the inductor, especially the multi-turn thin wire, there will also be gap capacitance, which will cause high-frequency signal bypass and reduce the actual filtering effect between the inductors.

4. When testing the inductance value and Q value with the meter, in order to obtain the correct data, the test lead should be as close as possible to the component body.

Introduction to Inductive Reactance
What is FPC (Flexible Printed Circuit)?