SD memory card is a new generation of high-speed storage devices based on semiconductor fast flash memory. The technology of the SD memory card is derived from the MULTIMEDIA Card format, and it has developed SDIO (SD Input/ Output) card on the basis of a compatible SD memory card. This compatibility includes mechanical, electronic, electricity, signal, and software. SD cards and SDIO cards are usually called SD memory cards.

The SD card structure ensures the security of digital files, and it is also easy to reformat, so there is a wide range of applications. Multimedia files such as music, movies can be easily saved to the SD card. There are many brands of SD cards on the market such as SanDisk, Kingmax, Panasonic, and Kingston.

SD card is a new type of storage device with the following features:

● Built-in encryption technology adapts to the copyright protection function based on the SDMI protocol.

The digital copyright protection scheme embedded in the SD card is set according to the Content Protection for Recordable Media (CPRM) proposed in 4C. Its core is the use of the Cryptomeria password (also known as "C2"). This feature is confidential. The DVD-AUDIO CD also uses an encryption scheme that is very similar to CPPM. SD card (Secure Digital Memory Card) is a new generation of memory devices based on semiconductor flash memory. SD card jointly developed its development in Panasonic, Toshiba, and SanDisk in Toshiba and SanDisk in June 1999. The size is like a stamp's SD memory card, with only 2 grams, but has high memory capacity, fast data transmission rate, great mobile flexibility, and good security.

The SD card combines SanDisk flash memory card control and MLC (Multilevel Cell) technology and Toshiba 0.16U and 0.13U NAND technology. It is connected to a special drive through a 9-pin interface and does not require an additional power supply to keep the information memorized on it. Moreover, it is an integrated solid medium, there is no moving portion, so there is no need to worry about damage to mechanical movement.

The biggest feature of SD cards is to ensure the security confidentiality of data by encryption. The SD card is consistent with the MultiMedia card on the shape and is compatible with the MMC card interface specification. However, some products such as mobile phones, SD cards, and MMS cards cannot be compatible. The SD card is higher than the equivalent MultiMedia Card card in terms of selling.

In addition to the 7 needles of the MMC card, the SD card interface is also added to the two edges, as the data line. 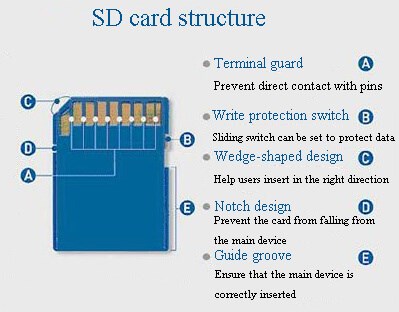 The main pins and functions of the SD card are as follows:

CLK: Clock signal, controller, or SD card transmits a command bit or data bit in each clock cycle. The frequency can vary between 0 to 25 MHz in the default speed mode of the SD bus, and the bus manager of the SD card freely produces a frequency of 0 to 25 MHz. In the UHS-I velocity mode, the clock frequency can be up to 208m.

Dat0 ~ 3: Data cable, data can also be transferred from the controller to the card from the card.

The register and its functions are described below:

CID (CARD Identification Register) Register: The card identification code register, the length is 16 bytes, and the SD card unique identification number is stored. This number cannot be modified after the card manufacturer is programmed.

Mainly used to control and manage the core of the internal storage, by receiving the commands sent by the user to control and set, and respond according to the command, and then perform the response data read/write and other operations.

The SD card has two drive modes: SPI mode and SDIO mode. The interface signals they use are different. In SPI mode, only 4 signal lines of the SD card, ie CS, DI, SCLK and DO (sd card selection, data input, clock, and data output).

MINI SD was developed by Panasonic and SanDisk. The first appearance was in the SanDisk booth in the 2003 CEBIT exhibition. Since then it has added Memory Stick Duo and XD cards such as a small memory card specification.

The design of the MiniSD card is initially made to take pictures with a photo pine mobile phone.

It can also be used as a general SD card by the SD adapter card. 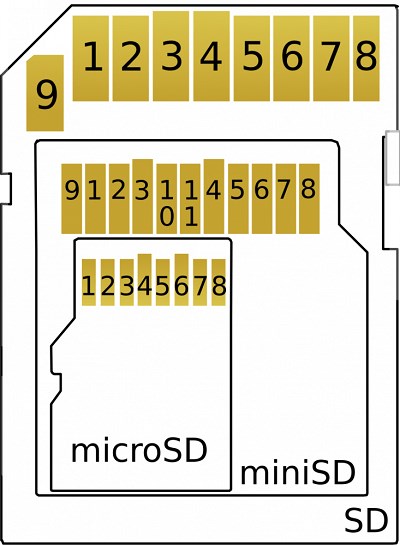 On the ultra-small memory card product, the SD Association took the lead in incorporating T-Flash into its family and named Micro SD to replace the status of Mini SD.

Only after the nail size Micro SD has been amazed after the launch of 2005. In 2008, the phone has spread this very small memory card.

M2, Micro SD, and MMC Micro are listed in the world's smallest mini memory card, and the ultra-small volume has a greater advantage. It can be applied to various types of digital products. For exquisite digital life, it has also played the role of "promoting wave". It is unfortunately only MICRO SD that only survives. The M2 card is a Sony version of Micro SD, eventually replaced by Micro SD.

It is calculated from the 150kb / s of the CD-ROM to a 1-fold speed calculation method. Basically, they can be 6 times faster than the standard CD-ROM (900 kB/sec), while the high-speed SD card can transmit 66X (10 MB / sec) and 133x or higher speed. Some digital cameras require high-speed SD cards to shoot more smoothly, and continuous shooting photos more quickly.

The rate of ordinary cards and high-speed cars is defined as class2, class4, clas6, and class 10 levels. Before the Class 10 card, there is a card that has Class11 and Class13, but this standard is eventually not a consensus with the SDA.

Also known as the ultra-high-speed card, the rate is defined as UHS-I and UHS-II. By the second quarter of 2013, only the UHS-I card has been listed. UHS-II was released in the fourth quarter of 2012, but in terms of technology development before 2014, UHS-I was complete enough to spend 2014 or even longer. The speed level of the UHS-I card is divided into UHS-Class0 and UHS-Class1. The Class and SD2.0 of the UHS-i are different, and there is no clear Class0 card, and the literal meaning is the card that does not reach Class1. It may be summarized as Class0 in the future. Class1 represents the maximum read of 104MB / s, while the Class represents the SD2.0 standard represents the smallest speed range.

The marker symbol on the card is shown in Figure. 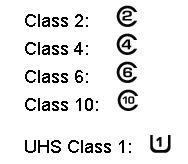 Different levels of reading speed and application requirements that meet: 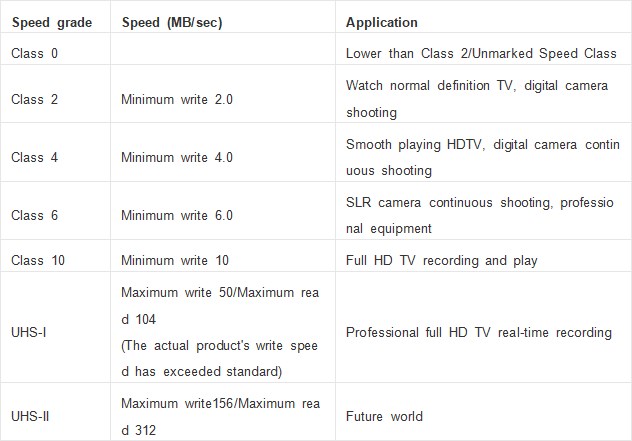 The SD card capacity is currently three levels, that is, SD, SDHC, and SDXC.

The table below is the level capacity range and standard disk format:

How to Select a Digital Isolator?
What is a Ceramic Filter?