I. Working Principle of Inverting Amplifier 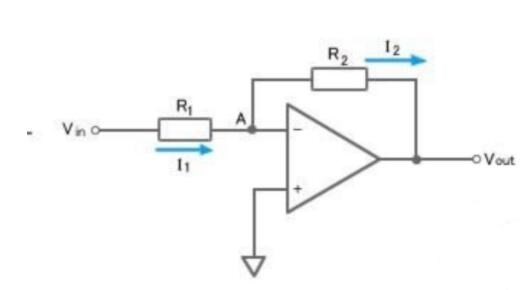 Calculate the gain through the relationship between the input and output in this amplifier circuit. The gain is the ratio of Vout and Vin, that is, Vout/Vin = (-I1xR2) / (I1xR1) =-R2/R1. The resulting gain is -, which means the waveform is inverted.

Special attention should be paid to this formula, the gain is only determined by the resistance ratio of R1 and R2. In other words. We can easily change the gain by changing the resistance. Apply negative feedback to an operational amplifier with high gain, and by adjusting the resistance value, the desired gain circuit can be obtained.

Due to the different ratios of the input resistance to the feedback resistance, the inverting amplifier can be divided into three types of circuits. which is:

(1) Inverter. The proportional relationship between the feedback resistance and the input resistance is R2=R1. 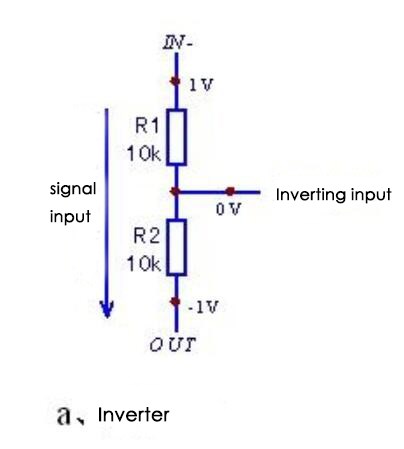 (2) Inverting amplifier. The proportional relationship between feedback resistance and input resistance is R2>R1. 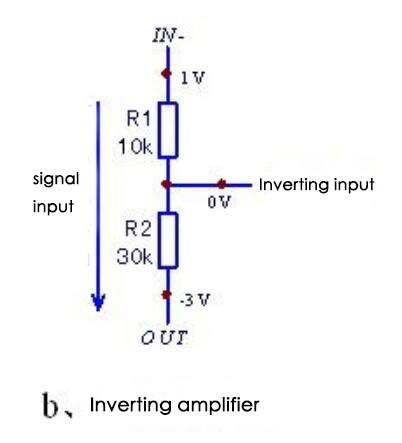 (3) Inverting attenuator. The proportional relationship between the feedback resistance and the input resistance is R2 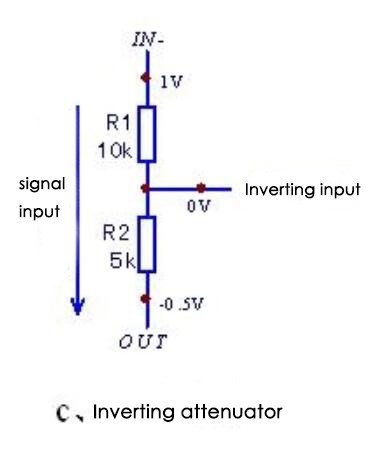 The starting point of analyzing its circuit principle is still playing the leading role in the series resistor divider, and the op-amp device is a supporting role. Or it can be analyzed from the perspective of input current. As shown in the figure above, the bias circuit is drawn separately to better explain the problem.

In the circuit a in the above figure, R1 and R2 form a series voltage divider circuit. The signal polarity determines the direction of the signal current, from bottom to bottom, that is, from the signal end to the output end. Since the same current flows into R1 and R2, R1=R2, and the voltage divider point is 0V, it can be inferred that the OUT terminal must be -1V. The -1V of the output terminal (0V of the voltage division point) is determined by the conduction degree of the output stage Q2, and is adjusted by itself according to the input signal.

It can also be analyzed from another angle. Since the signal current flowing into R1 is +1mA, the current flowing through R2 must be -1mA to make the voltage divider point 0V. The task of the op-amp device is to automatically control the voltage across R2 (or control the reverse current that flows through R2 in the same amount as R1) so that its inverting input becomes 0V (the control target of the inverting amplifier).

It can be deduced from this that when R2>R1, in order to obtain the reverse current flowing through R2, the current is still equal to R1, and the OUT terminal must be adjusted to -3V; when R2

The entire op-amp circuit is a game of series resistor divider. As long as you master the analysis ability of the resistor series voltage divider circuit, you have found the golden key to analyze the principle of the operational amplifier circuit.

Obviously, because the non-inverting input terminal is grounded, the final control purpose of the amplifier is to always make the inverting input terminal become 0V ground level under the dynamic adjustment of the output stage in the amplification area, no matter what the input signal is. In the above figure, R1 is the input resistance, R2 is the feedback resistance, and the voltage amplification factor of the circuit = R2/R3.

In this regard, the basic characteristics of the normal working state of the inverting amplifier can be drawn:

(1) Both input terminals are 0V to ground.

(2) The input and input signal voltages show a reverse trend, and the magnitude depends on the proportional relationship between R1 and R2.

If you need to analyze or get a detection judgment, you must first determine the circuit in the figure. What point is the signal input terminal?

Due to the "virtual ground" characteristic of the inverting amplifier, the two input terminals of the op-amp device itself are at 0V ground level and do not change with the input signal voltage change (or only transient changes, which are extremely difficult to capture in the measurement). Obviously, the right end of the input resistance R1 is not the signal input end, but the left end is the signal input end, so R2/R1=-VOUT/VIN- (the input voltage at the left end of R1).

(1) The normal working state of the inverting amplifier.

That is to meet two fundamental characteristics:

a. Both input terminals are 0V to ground.

b. The input and input signal voltages show a reverse trend, and the magnitude depends on the proportional relationship between R1 and R2.

Not for this, that is, a fault state.

a. After the "virtual ground" principle is not met, first check according to the comparator principle. If it meets it, the op-amp device is good, and the peripheral components are faulty.

b. If the principle of the comparator is not met, the op-amp device is broken.

(1) Integrator: Replace the resistance of the original inverting amplifier R2 with a capacitor C2. At this time, the relationship between the input signal Vi and the output signal Vo forms an integral relationship.

(2) Differentiator: Replace the resistance of the original inverting amplifier R1 with an electric capacitor C. At this time, the relationship between the input signal Vi and the output signal Vo is transformed into a differential relationship.

Working Principle and Types of Throttle Position Sensor
What is a Thermoelectric Cooler?