In other words, as long as the LTPO display is used, there is basically no need to worry about the display effect. It's just that there are very few products that use this technology at present, and there are only four models at present.

OnePlus 9Pro: OnePlus mobile phone is the first to launch a high refresh rate display in China. The front screen parameter is a 2K+120Hz+LTPO display, which supports 1 billion color display.

Samsung S21 Ultra: When it comes to the flagship Galaxy series, I believe that many people still regard it as the king of the Android camp. The Samsung S21 Ultra itself is not weak, using 2K resolution + 120Hz refresh rate on the front, or adaptive refresh rate, that is, LTPO technology, which saves more power during daily use.

Obviously, the popularization of each technology will take some time to complete. For example, 5G technology is the first to support Android phones, and Apple is also behind. As for the on-screen display (AOD) function and LTPO display technology, the iPhone 13 series is also highly likely to be used. But as the forerunner of these two technologies, the Android camp can undoubtedly play a leading role in smartphones. But it is undeniable that 5G technology, high refresh rate screens, and high resolution have all brought greater pressure on battery life. I really hope that more manufacturers will also use these two technologies in the future to provide users with a better experience of using the machine.

The emergence of LTPO technology

It is rare for Apple to publish a technical paper (39-3) on SID for the first time in 2019, with the subject of AMOLED's LTPO TFT technical connotation. That is to say, the flexible AMOLED panel TFT technology adopted by the wearable device product Apple Watch Series 4 is a TFT structure developed by Apple itself called "LTPO".

The application of LTPO on Apple Watch is of extraordinary significance. As a wearable device, it has higher battery life requirements than mobile phones actually used, and the battery life of Apple Watch has been criticized by consumers before.

But for Apple, the main application direction of LTPO display is still mobile phones and tablets, and even core products such as Macs. However, LTPO is not the only way to explore screen power saving. In addition to LTPO, there are technologies such as silicon-based and IGZO. Among them, IGZO was once considered to be the most favorable technology competitor. Panel manufacturers including Sharp, Huajiacai, Rouyu, etc. are all trying to use IGZO to promote OLED.

However, from a commercial point of view, the prospects for LTPO will be more clear. It is understood that LTPO is the first patent proposed and owned by Apple, which means that in order to reduce costs, Apple will work harder to promote its LTPO technology. At the same time, Apple owns many hardware products such as iPhone, iPad and Mac. Once the OLED mass production of LTPO technology is successful, then LPTO will be widely used in Apple products. According to Apple's influence on the supply chain, industries like BOE and Visionox that want to enter Apple's supply chain will also begin to follow up related technologies.

Samsung is currently the main supplier of OLED screens used in the iPhone. According to data from the market research company UBI Research, Samsung Display will convert its OLED production line dedicated to its largest customer Apple to the production of low-temperature polysilicon (LTPO) thin-film transistor (TFT) production line in the first half of 2021.

What is LTPO technology?

Traditional OLED screens use a technology called LTPS OLED, where LPTS (Low-Temperature Polycrystalline Silicon Thin Film Transistor) refers to the material of the OLED display substrate. When OLED pixels emit light, electrons need to pass through the crystal light of the display panel to stimulate the pixels to emit light.

This approach is not a big problem before, but as users have higher and higher requirements for screen resolution, the PPI of mobile phone screens has also risen. For LCD screens, the increase in pixel density means that it is more difficult for light to pass through the display layer. Although OLED does not have this problem, the increase in pixel density means that manufacturers need to compress the size of thetransistorsbecause of the one-to-one correspondence between pixels and transistors. The size is closely related to the electron passing efficiency.

The full name of LTPO in English is Low-Temperature Polycrystalline Oxide. At present, the two main backplane technologies for small OLEDs are LTPS and oxide. LTPO is a new type of backplane technology that combines the advantages of these two technologies to achieve higher charge mobility and stability at low production costs.

So how is it combined? It puts LTPS and oxide design in the same pixel, LTPS is used to drive the display, and oxide is used for switching. Simply put, two TFT devices, LTPS and Oxide, are integrated in the same pixel. Oxide is a bottom gate structure, and LTPS is a top gate structure. This new process combines the advantages of strong driving capability of the LTPS TFT process and the advantages of low leakage and low power consumption of the Oxde TFT process. 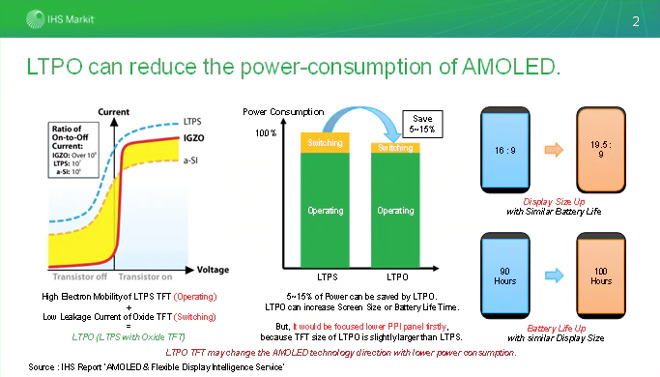 From the perspective of process patent documents, LTPO needs to build an oxide layer on the basis of LTPS. One of the most important problems here is that manufacturers need to ensure that when laying oxide layers, they do not affect the characteristics of the transistors in the original LTPS interlayer dielectric.

The substrate technologies currently considered to be applied to OLED mainly include LTPS, IGZO, silicon-based, and LTPO.

Silicon-based (a-Si): A mature technology used for many years. But due to its low mobility, only 0.3-1cm²/V·S, it takes up a lot of space, so it is not suitable for high-resolution displays, but the manufacturing process is relatively simple, and production cost is not high. It’s most commonly used in LCD.

Low-temperature polysilicon (LTPS): The biggest advantage of low-temperature polysilicon is its ultra-high mobility. It can achieve a mobility >100cm²/V·S, so it can reduce the driving voltage.  It has a power saving effect compared to other technologies because of the higher the refresh rate. The response speed is very fast, so it only needs a small space, and is most suitable for high refresh rate and high PPI screens.

Indium Gallium Zinc Oxide (IGZO): The mobility performance of LTPS is very good, but it is also very expensive. If you want to make a large-size LTPS, the cost will rise very quickly, so the industry chooses IGZO, whose mobility can be It reaches 10-25cm²/V·S. It is not as good as LTPS but much higher than a-Si. More importantly, its switching ratio will be larger than that of LTPS, which means less leakage and can ensure the stability of low refresh rate. It can also be matched with smaller capacitors and is often used in large-size products.

And IGZO is currently the second only to LTPS to promote OLED technology, currently the main companies are Sharp, Huajiacai, and Rouyu. CEC is also involved in IGZO, but it has not publicly stated that it will be AMOLED.

As for silicon-based OLEDs, there is actually not much competition with the above backplane technology, because silicon-based OLEDs are mainly used in high-PPI AR/VR near-eye displays. Of course, the cost price is much higher than the price of these glass substrates. At present, there are mainly Kopin, Yunnan Northern Ored Optoelectronics Technology, BOE, Sony, eMagin and MicroOLED, Seeya Technology, Kunshan Visionox, and Xitai.

LTPS has high mobility and no low leakage. IGZO has low leakage but the mobility is not high enough. Let's just combine them:

Using LTPS for driving, a smaller driving current and lower driving voltage can be achieved.

Let IGZO be responsible for the switch because the smaller leakage can keep the pixels on for a longer time and achieve a lower refresh rate.

This is the origin of LTPO at the theoretical level. It makes the available refresh rate range of OLED become very wide. In other words, both LTPS and IGZO have the advantages that LTPO should have, but their disadvantages can be circumvented, as summarized below:

What is speaker?
Silicon carbide (SiC) and gallium nitride (GaN), who is the future of wide bandgap (WBG) materials?