What is a server?

A server is a type of computer. It runs faster, has a higher load, and is more expensive than an ordinary computer. The server provides computing or application services for other clients (such as PCs, smartphones, ATMs, and other terminals or even large equipment such as train systems) in the network. The server has high-speed CPU computing power, long-term reliable operation, powerful I/O external data throughput, and better scalability.

According to the services provided by the server, in general, the server has the ability to respond to service requests, undertake services, and guarantee services. As an electronic device, a server has a very complicated internal structure, but it is not much different from the internal structure of an ordinary computer, such as: cpu, hard disk, memory, system, system bus, etc.

Personal computers are called PCs, and PC problems have a limited scope of influence. A computer that serves many people is called a server. If the server has a problem, the scope of influence is relatively large.

A server is composed of many components, including CPU, memory, hard disk, fan, power supply, and so on. Although the server and the PC adopt a similar architecture, the specifications and professionalism of each component of the server are higher.

As can be seen from the table below, we can see the gap between the server and the PC.

Servers are generally deployed in major companies and units, such as major operators, financial companies, gaming companies, and Internet companies. A data center composed of hundreds of servers can store massive amounts of data and provide network services, financial services, or data services to hundreds of millions of people.

What happens if the server crashes?

Once the server crashes, there may be problems with the various services built into the server. And because the server serves a large number of people, the impact will be wider and the consequences will be more serious. 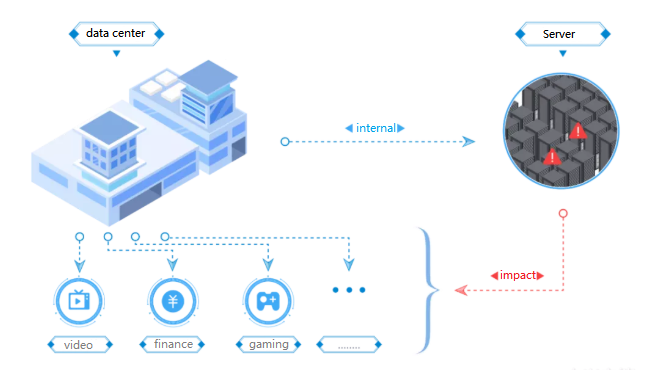 The impact of a server crash

Video website: There is a large-scale inaccessibility failure, online video cannot be watched. In case the data in the server is lost and the original videos and animations of many authors cannot be restored, it would be a disaster.

Financial system: A financial system with tens of millions of transactions per second requires a rock-solid server. After all, it has affected everyone's capital exchanges, and the loss is incalculable.

Why does the server crash?

Some reasons why the server cannot continue to provide services may be:

The contradiction between the fast-growing number of users and the server performance cannot grow at the same time. 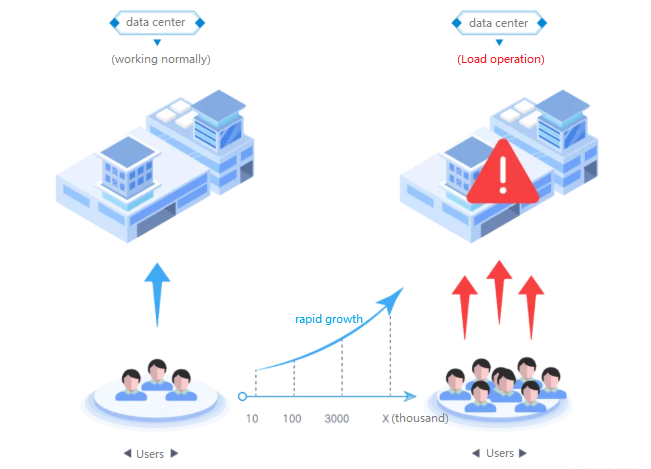 The impact of user growth on servers

Although the data center contains hundreds of servers, it can provide services to a large number of users. When the number of users grows too fast, the performance of the existing number of servers will also reach the limit. Increasing productivity will not happen overnight, resulting in productivity falling short of domestic demand. Building a brand new data center requires a lot of time in traditional methods.

In the Internet age, hundreds of millions of service requests are submitted to the server for processing, forcing the server to run at full capacity: CPU computing to fever, memory loading data to spinning, and hard disk space close to 100%.

Mass visits in a short period of time

Internet-specific phenomena such as major social events and unexpected hot topics will cause a large number of users to flood into a certain website or APP in a short period of time, causing waves of impact on the processing performance of the server like a sudden tsunami. No matter how large a data center is, servers will be overwhelmed by the enthusiasm of the people, resulting in the temporary inaccessibility of websites and apps. 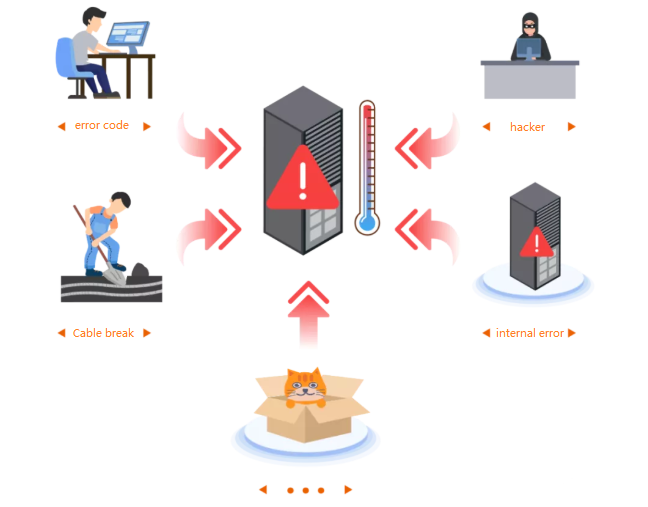 What causes the server to crash may also be something that no one can think of. For example an extra line of code, optical cables dug in road construction, DDoS attacks from unknown sources, Trojan horse implantation by hackers, internal server errors (5XX status codes, see for details, besides 404, what other "secret codes" are on the web page?" ). Just like Schrodinger's cat, no one can confirm which cat caused the trouble until the moment the box is opened.

We can measure whether the server has achieved its design purpose from these aspects; R: Reliability; A: Availability; S: Scalability; U: Usability; M: Manageability, namely The RASUM metric of the server.

The server must have a certain degree of "scalability". This is because the corporate network cannot last forever, especially in today's information age. If the server does not have a certain degree of scalability, and when the number of users increases, it will be incompetent. A server worth tens of thousands or even hundreds of thousands will be eliminated in a short period of time, which is unbearable for any enterprise. In order to maintain scalability, it is usually necessary to have a certain amount of expandable space and redundancy on the server (such as disk array rack positions, PCI and memory slot positions, etc.).

The function of the server is much more complicated than that of the PC. It not only refers to its hardware configuration but also refers to its software system configuration. For servers to achieve so many functions, it is unimaginable without comprehensive software support. However, if there are too many software systems, the performance of the server may be degraded, and management personnel cannot effectively manipulate it. Therefore, when designing servers, many server manufacturers must fully consider the availability and stability of the server, and must also work hard on the ease of use of the server.

For a server, a very important aspect is its "usability", that is, the selected server can meet the requirements of long-term stable work without frequent problems.

Because the server is facing users of the entire network, rather than a single user. In large and medium-sized enterprises, the server is usually required to be uninterrupted. In some special application areas, some servers have to work uninterrupted even if they are not used by users, because they must continuously provide users with connection services, regardless of whether it is on or off work, whether it is a working day, a break, or a holiday. This is the fundamental reason why the server must have extremely high stability.

Generally speaking, specialized servers must work uninterrupted 7X24 hours, especially like some large-scale network servers, such as servers used by large companies, web servers, and iqdeWEB servers that provide public services. For these servers, there may only be one number of real work startups, that is, the time it was put into official use after it was purchased and fully installed and configured. After that, it worked uninterrupted until it was completely scrapped. If something goes wrong at every turn, the network cannot maintain normal operation for a long time. In order to ensure that the server has a high "availability", in addition to requiring the quality of all accessories, necessary technical and configuration measures, such as hardware redundancy, online diagnosis, etc., can also be taken.

Among the main features of the server, there is another important feature, that is, the "manageability" of the server. Although we say that the server needs to work continuously without interruption, no matter how good the product is, it is likely to fail. Although the server has sufficient guarantee in terms of stability, it should also have necessary measures to avoid errors, find problems in time, and can be maintained in time if it fails. This not only reduces the chance of server errors but also greatly improves the efficiency of server maintenance. In fact, it is the serviceability proposed by Sun.

What is ISP (Image Signal Processor)?
Applications of Sensors on CNC Machine Tools