Due to the characteristics of high precision, high speed, high efficiency, and safety and reliability, CNC machine tools are rapidly gaining popularity in enterprises during the renewal of manufacturing technology and equipment. A CNC machine tool is an automated machine tool equipped with a program control system, which can make the machine tool move and process parts according to the program. It integrates the latest technologies such as machinery, automation, computers, measurement, and microelectronics, and uses a variety of sensors.

A sensor (measuring element; transducer) is a device that can feel the prescribed measurement and convert it into a usable output signal according to a certain rule.

The composition of the sensor

A sensor is a physical device or biological organ that can detect and sense external signals, physical conditions (such as light, heat, humidity), or chemical composition (such as smoke). It also transmits the detected information to other devices or organs. A sensor meets the needs of information transmission, processing, storage, display, record, and control requirements. It is the first link to realize automatic detection and automatic control.

The function of the sensor

①Physics, based on physical effects such as force, heat, light, electricity, magnetism, and sound.

②Chemistry, based on the principle of the chemical reaction.

③Biology, based on molecular recognition functions such as enzymes, antibodies, and hormones.

2) The sensor must meet the standards and requirements in terms of speed and accuracy;

3) The use and maintenance of the sensor is more convenient;

4) The cost of the sensor is lower.

1) Some applications of linear gratings

Linear gratings are made by applying the phenomenon of light reflection and projection. They are usually used in the detection of displacement. They have higher recognition ability and higher detection accuracy than optical encoders. They are widely used in the dynamic measurement.

During the feed drive process, the grating is fixed on the bed. The actual displacement of the carriage movement is directly reflected on some pulse signals generated by the linear grating. The servo system that uses linear grating to detect the specific position of the worktable is a fully closed-loop control system.

2) Some applications of pulse encoders

The pulse encoder is a kind of speed sensor or angular displacement sensor, this sensor can convert mechanical rotation angle into a kind of electric pulse. There are three types of pulse encoders, namely electromagnetic, contact, and photoelectric. Among the above three kinds of pulse encoders, the photoelectric type is the most widely used. There is a light spot encoder at each of the x-axis and z-axis. It is mainly used for the detection of digital and angular displacement. 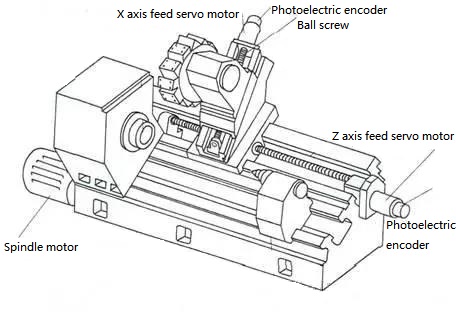 3) Some applications of resolver

There is a certain difference between the position sensor and the displacement sensor. Position sensors are mainly divided into proximity sensors and contact sensors.

The contacts of the contact sensor are usually contacted and pressed by two objects to carry out corresponding work. There are often limit switches and two-dimensional matrix position sensors and so on. The structure of the limit switch is relatively simple, low in cost, and reliable in operation. If an object touches the travel switch during operation, the internal contact of the travel switch will produce action, thereby realizing the control of the entire process. If a travel switch is configured at both ends of the x-axis, y-axis, and z-axis, then the travel switch will control the range of movement. The two-dimensional matrix position sensor is installed and configured on the inner side of the manipulator's palm. The sensor is mainly used to detect the contact position between itself and an object.

The Hall sensor is a sensor made using the Hall phenomenon. When semiconductors such as germanium are placed in a magnetic field and a current flows in one direction, a potential difference will appear in the vertical direction, which is the Hall phenomenon. Fix the small magnet on the moving part. When the part is close to the Hall element, a Hall phenomenon occurs to determine whether the object is in place.

The speed sensor is a kind of sensor that converts speed into an electric signal. On the one hand, this kind of sensor can detect linear speed. On the other hand, it can also detect angular speed. Commonly used sensors in CNC machine tools are pulse encoders and tachogenerators.

Under normal circumstances, the speed sensor is mainly used in the speed detection of the CNC system servo unit in the CNC machine tool.

A pressure sensor is a kind of sensor that converts pressure into an electrical signal. According to the working principle of the pressure sensor, it can be divided into capacitive, piezoelectric, and piezoresistive sensors. 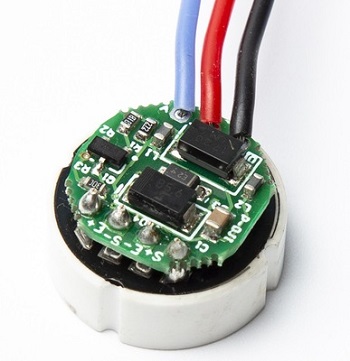 During the operation of the CNC machine tool, the cutting of moving parts and the operation of the motor will produce different degrees of temperature. And the heat is not easy to dissipate as soon as possible. This phenomenon affects the machining accuracy of the parts to a large extent. In order to avoid the occurrence of the above phenomenon, install temperature sensors on some parts of the CNC machine tool that are susceptible to temperature. This setting can convert the temperature signal into an electrical signal. It is transmitted to the numerical control system for certain temperature compensation.

Tool wear will affect the surface roughness and dimensional accuracy of the workpiece to a certain extent. Therefore, in order to avoid the occurrence of the above phenomenon in CNC machine tools, it is necessary to monitor tool wear accordingly. When the tool wears out, the load will increase on the spindle motor of the machine tool. At the same time, the voltage and current of the motor will change accordingly, and the power of the motor will also change. The power change is detected by the Hall sensor. When the power changes to an alarm in the CNC system and the locomotive stops running, the tool should be adjusted or replaced immediately.

What is Server and Why does a Server Crash?
Will HBM replace DDR and become Computer Memory?