The cell phone antenna is a small antenna device on the mobile phone to receive and transmit electromagnetic waves. When you use a smartphone to make calls, send text messages, play online games, etc. a series of communication behaviors every day. Have you ever considered that the phone's antenna module is responsible for all of this? The smartphone will become a stand-alone game console if there is no antenna. 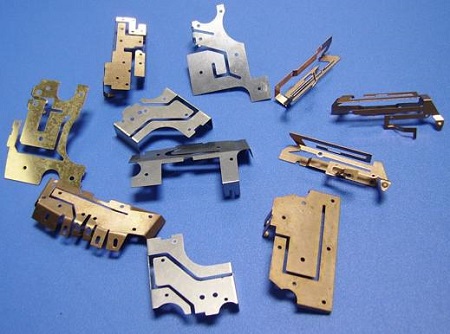 Because the radiation efficiency of the antenna itself must be considered, the antenna gain is usually to replace the directivity. The relationship between the two is:

The radiation efficiency of the antenna is related to the amount of energy lost in the electromagnetic wave radiation process.

The earliest big cell phone antenna was an external antenna, which was a low-frequency analog signal antenna.

Built-in antennae were utilized by NOKIA in the 2G period, which was stamped from thin stainless steel sheets. Later, in order to reduce costs, FPC (printed circuit boards) appeared. FPC is characterized by its soft material and can be attached to curved surfaces. It has advantages over metal antennas in terms of space utilization. FPC antennas are still the mainstream antenna technology until now. 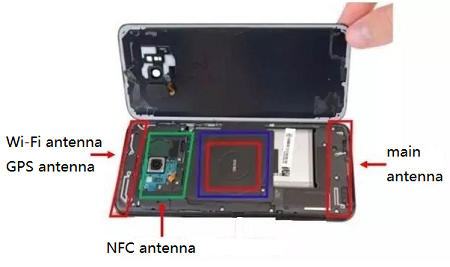 With the development of technology, the LDS antenna technology came into being. It is to directly engrave the antenna with a laser on a specially processed plastic molding material. We can see this technology in current mid-to-high-end cell phones.

Without increasing bandwidth or total transmission power consumption, MIMO can dramatically enhance data throughput and transmission distance. The primary concept of MIMO is to make use of the spatial freedom given by many transmitting and receiving antennas to increase the spectrum efficiency of a wireless communication system, resulting in higher transmission rates and better communication quality.

It is expected that terminals would use a greater number of MIMO technologies in the future 5G network.

The size remains the same, the quantity increases

The antenna is an important part of wireless communication equipment. It transmits and receives electromagnetic wave signals. The antenna is a wire with a specified length, which can be manufactured on PCB and FPC. 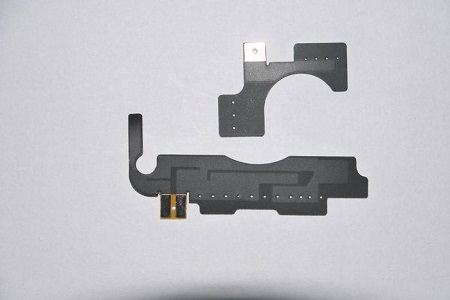 The current 4G communication band is 0.8-2.6GHz, and the main communication frequency band used by 5G is also below 6GHz. Therefore, there will be no major changes in the size of cell phone antennas using the 5G Sub-6G frequency band. It will remain at the centimeter level.

However, 5G will employ additional antennas, or MIMO technology, in order to meet increased speed needs. For example, 4×4 MIMO has 4 transmitter antennas and 4 collector antennas.

The increase in the number of antennas will require the shape of multiple antennas to be re-arranged, putting new requirements on the back cover and wiring of the cell phone to achieve better efficiency. The Huawei Mate30 Pro 5G has a total of 21 antennae, 14 of which are 5G antennas.

Difficulties of cell phone antenna design in the 5G era

There are two 5G frequency bands, low frequency, and high frequency. The low-frequency band is 3~5Ghz. It is similar to the current 4G band, and the antenna can follow the current design. However, in order to meet the 5G transmission rate requirements, the number of antennas must be increased.

R&D personnel said that fingers and faces will have a "proximity effect" in front of the 5G millimeter-wave antenna. Not only will it cause the signal to drop, but it may also even directly shield the signal.

However, the greater challenge is yet to come.

The clearance area of antennas is often on the "chin". However, the full-screen design greatly reduces the area of the "chin". And a whole metal screen completely covers the front of the phone, which places very high requirements on the antenna design.

Specifically, because 5G millimeter waves are very short, interference from metals will be more serious, requiring at least a 1.5mm headroom. When the hand or face is blocking the phone, the phone signal will start looking for the lowest bit error rate frequency band. Therefore, when designing a 5G terminal, the antenna installation location must be appropriate from the beginning.

In addition to receiving performance, space coverage and heat dissipation issues must also be considered. The wider the spatial coverage, the more conducive to the user's wireless experience, but the wider the spatial coverage, the design of the cell phone is often sacrificed. In addition, in order to prevent damage to the antenna system due to improper heat dissipation, we should pay attention to the control of materials when designing the whole machine.

The challenges brought about by 5G antenna design are likely to force manufacturers to abandon the metal back cover and change the shape and size of the fuselage. If you don't have an intuitive impression of this, then take a look at the latest 5G module of Moto Z3, and you will have the answer.

The difficult antenna design does not mean that smartphones in the 5G era will definitely become ugly. The smartphone market in the 5G era may usher in a new round of reshuffles. Truly powerful manufacturers will stand out and continue to provide consumers with products with good looks and functions.

In fact, 5G antenna design is difficult. But it doesn’t mean that there are not solutions. At present, the industry is generally optimistic about the antenna array (multi-antenna unit) design. That is to say, an antenna system composes of many identical single antennas arranged according to a certain rule.

AiM's millimeter-wave antenna arrays generally use complementary radiation beams (such as broadside radiation, or wide-side radiation, and end-fire radiation, or end-fire) antenna types (such as patch antennas) to achieve wider spatial coverage. It is based on the appropriate design of the antenna feed point, to achieve dual-polarization (vertical and horizontal polarization) coverage, thereby greatly improving the range of millimeter-wave signals and coverage.

In addition, the small-size phased antenna array design helps to reduce the 5G antenna's need for internal space and antenna clearance area. Therefore, it achieves a more compact body design and a higher proportion of the screen.  Qualcomm released The QTM052 millimeter wave antenna module in October 2020. It is 25% smaller than the previous generation, further reducing the space occupied by the 5G antenna on the cell phone.

The 5G era is a brand-new era. Not only antenna design, the network layout based on 5G, the ecological chain based on 5G, and the application scenarios based on 5G all pose new challenges for smartphone manufacturers. Fortunately, challenges are also opportunities. In the 5G era, truly capable manufacturers will surely stand out and achieve a new leap in the new era.

Introduction to UFS (Universal Flash Storage)
Why are TWS Earbuds so Popular?